I learned about Nitro 7 Coffee & Bar during PitStop’s media launch in 2017. I think they were just called Nitro 7 back then and they are Philippines’ first nitrogen-infused cold-brew coffee and tea bar!

Nitro 7 Coffee & Tea Bar actually started in 2016. They are a concept bar that operates a new technology in coffee and tea preparation. They brew their premium coffee beans in cold temperature for 8 hours, infuse it with nitrogen gas, and serve it in tap like draft beer.

I was really amazed by that nitrogen gas thing and remember that there were dessert shops who use that, too. Going back to the point. After drinking their coffee, I never forgot the taste. So I would pass by that area just to buy a cup from them.

Then the year when one food park after another started closing and soon Pitstop followed, too. I remember searching for the nearest branch but nothing. Then on September 2018, I attended an event called Bread & Brew with my fellow foodies – FoodieViewsPH.

The event was held at The Annex, SM North EDSA. After attending, we checked the other stores on that floor and that’s when I saw the familiar sign! Nitro 7 Coffee & Tea Bar. I was so happy there’s a branch near me. But since I don’t really pass by that area anymore, I would visit them once in a while.

Fast forward to New year’s Day, the day I first visited by Ayala Malls The 30th. It’s not really my area but there’s a restaurant I’ve been meaning to try. After a lovely lunch, my family and I had coffee and then went inside the mall to check the stores.

On the second floor, I saw that familiar sign again! 🙂 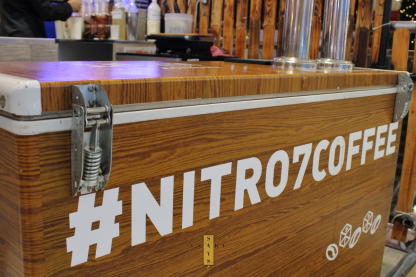 The Coffee & The Tea

I’m not new to Nitro 7’s coffee. In fact, I have tasted their offerings and may favourite drinks are Black Nitro, Irish Creme Breve, Nitro Mocha and Peppermint Mocha. But I have not tried their milk teas, yet. So I thought that was the perfect time to try them.

Yes, we took the drinks to-go but I tasted them after buying. As you can see they’re not full especially the third one. That’s the Melon Milk Tea which I did appreciate.

I think my love for coffee is just bigger than milk teas. But Nitro 7’s coffee selection is great. Maybe their milk teas are just not my cup of tea. *no pun intended

Would you like to try their coffee or milk tea? If you do, please let me know how it goes in the comment section below. I, on the other hand, will visit my favourite branch and order a tea there just to see if there’s a difference. But this one is located on the second floor of Ayala Malls The 30th, Meralco Avenue, Ugong, Pasig City.