Whenever it’s revealed that I was raised by my abuelito (grandfather) and abuelita (grandmother) or laking-lolo’t lola, I would get positive reactions. They say that people raised by grandparents are very different. They’re good with older people, respectful, kind and so on. I really appreciate that but people who were raised by their grandparents are people, too. We have flaws, we make mistakes, and in my case, shot out several people in my life. *trying to live a positive life here

Anyways, I’m saying this because one of my favourite films titled, “Coco” touched a chord. My abuelita and I would always watch it. She would also laugh once I start to sing along. And if you follow me on Instagram, I always share that it’s being shown on this channel or that channel. (It’s now on Netflix, too!) If you’ve seen it, I know you agree that “Coco” is a beautiful film.

Despite his family’s generations-old ban on music, young Miguel dreams of becoming an accomplished musician like his idol Ernesto de la Cruz. Desperate to prove his talent, Miguel finds himself in the stunning and colourful Land of the Dead. After meeting a charming trickster named Héctor, the two new friends embark on an extraordinary journey to unlock the real story behind Miguel’s family history. 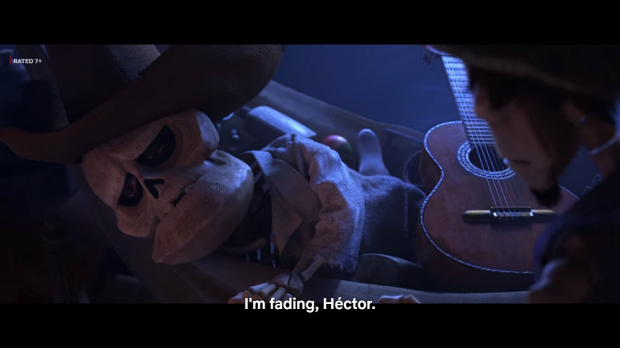 Since September 8 is Grandparents Day…

and it will definitely not be celebrated by everyone, I just want to say that you should go visit your grandparents in the cemetery. If you can’t, you can always light a candle and say a prayer. I know you don’t want them to end up like Chicharrón, forgotten. Am I right, mi amigo?

Look. I am fully aware that Día de los Muertos or Day of the Dead originated in Mexico and is celebrated all over Latin America. But you can’t erase the fact that this tradition is similar to ours. All I’m saying is that family is important. I know there are families who aren’t always on good terms but family is not limited to blood relations. Friends can be your family.

Also, it’s worth mentioning that I’ve met several elderlies who have shared a story or two. They love to share stories and love to listen/ 🙂 You see, being raised by grandparents made me conscious about the elderly. If I see one who needs help, I do not hesitate. That is why I have many encounters like what I am about to share.

In this world we live in…

there are people who don’t want to lend a hand. Yes, I do not know their story. I’m not judging anyone but I have seen several adults and young children with their grandmother who doesn’t lend them a hand.

Would it really kill you to put your phone in your pocket and assist your grandmother? Malls have elevators. DO NOT let them take the broken escalator. If there is no choice, then help them get down.

Kids, you won’t be young forever. Parents, please teach your children and be a good example. Also, please light a candle and say a prayer during All Saints Day and All Souls Day. It really pains me to see fewer people doing that.

Lastly, it would be lovely to be there for each other while we’re still here in the Land of the Living.