Seven Best Asian Films at the Cinemalaya’s Visions of Asia

THE 15th edition of the Cinemalaya Film Festival presents a kaleidoscope of cinema from the Asian region through Visions of Asia, a major component of the country’s largest independent film festival.

Four award-winning NETPAC films and three Asian indie films will convey Asian sensibilities to film enthusiasts, which will be screened on August 3 to 10, at various CCP venues.

“A Tiger in Winter” happens one winter day when a tiger escapes from the zoo. Gyeong-yu, who has been living off of his girlfriend, is suddenly abandoned by her for reasons he can’t understand. Having nowhere to go, Gyeong-yu finds himself on the street with a suitcase. Working for a designated driver service, he drifts this and that way, and happens to come across his former girlfriend Yoo-jung who has become a novelist, as Gyeong-yu once dreamed of doing. However being in a tailspin, Yoo-jung is unable to write, and proposes Gyeong-yu a weird offer. The film stars Korean actor Lee Jin-uk and actress Ko Hyun-joung.

Starring 2PM member Nichkhun, Thai actor Sunny Suwanmethanont and Thai actress Urassaya Sperbund, “Brother of the Year” explores the unbreakable bond between brother and sister. In the film, siblings Chut and Jane have fought over everything ever since they were kids. The only time Chut acts like an older brother is when he bullies Jane’s admirers into leaving her alone. When he finds out that Jane has a boyfriend, a great brother like Chut will do everything in his power to put a stop to anything that makes his little sister happy. 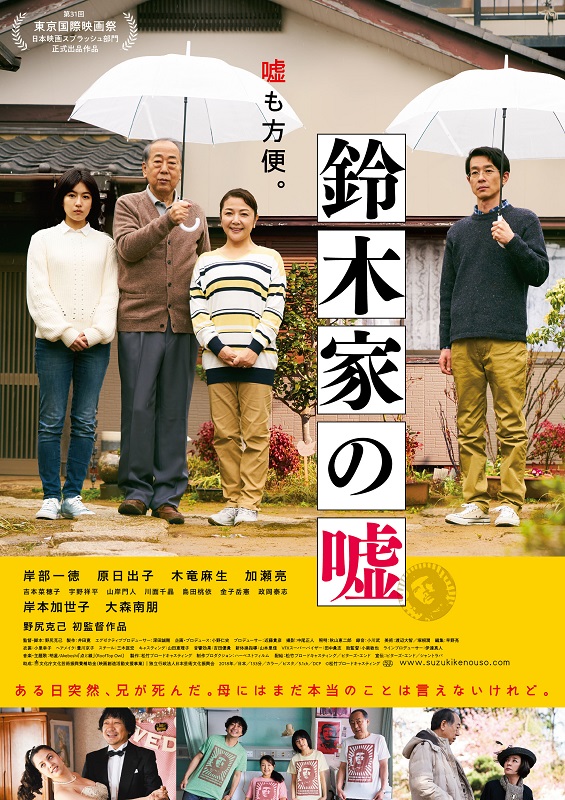 In “Lying to Mom,” father Sachio and daughter Fumi lie on the spur of moment to mother Yuko about the death of son Koichi, who has committed suicide. Not wanting to endanger Yuko’s recovery and concerned for her delicate condition, the father and the daughter told Yuko that their son has found work overseas. But how long can father and daughter continue to deceive Yuko? What lies behind the brother’s suicide?

Treating the emotions of grief, suffering, absurdity, happiness, familial love and interspersed with moments of laughter, the film presents a soulfully meticulous portrayal of how one ordinary family deals with the loss of one of its members. The screening is in partnership with the Japan Foundation.

Directed by Iranian director Nima Yar (Salehiyar), “Kejal” is about Kejal, a 26-year-old university student from Kurdistan in the west of Iran. When her brother, who is a smuggler, was killed at the border, Kejal begins doing the same work, smuggling goods at the Iran-Iraq border, to provide for her mother and younger brother.

In “Still Human,” a paralyzed and hopeless man meets his new Filipino domestic helper who has put her dreams on hold to come to Hong Kong to earn a living. These two strangers live under the same roof, and they learn to face the different seasons of life.

Initially inspired by an incident that happened in September 2001 on the Nangpa-La Pass on the Tibet-Nepal border where Chinese border guards opened fire on a group of escaping Tibetans, killing a 17-year-old nun, “The Sweet Requiem” follows the story of a young, exile Tibetan woman who unexpectedly sees a man from her past. Her long-suppressed memories of her traumatic escape across the Himalayas are reignited, and she is propelled on an obsessive search for reconciliation and closure.

“The Third Wife” is a coming-of-age story, a tale of love and self-discovery in a time when women were rarely given a voice. Set in the late 19th century in rural Vietnam, 14-year-old May is given away in an arranged marriage and becomes the third wife to her older husband. May learns that she can gain status and security if she gives birth to a male child. This becomes a real possibility when she gets pregnant. However, her path is fraught with danger when May starts to develop an attraction for Xuan, the second wife. As May observes the unfolding tragedy of forbidden love and its devastating consequences, she must make a choice, to either carry on in silence and safety, or forge a way towards personal freedom.

Visions of Asia is part of the Cinemalaya Independent Film Festival, a project of the Cultural Center of the Philippines and the Cinemalaya Foundation, Inc. Established in 2005, Cinemalaya is an all-digital film festival and competition that aims to discover, encourage and honor cinematic works of Filipino filmmakers. This year’s Cinemalaya will be held on August 2 to 11, at the CCP theaters, and August 7 to 13 at selected Ayala Malls Cinemas and Vista Malls in Metro Manila, Pampanga, Naga, Legaspi, Bacolod, Iloilo and Davao.