I Found My Grandfather’s Vintage Cameras

It was Father’s Day last Sunday. After visiting my abuelito at the memorial park, I suddenly had the desire to look at our photo albums. So I did and realised that no matter how many years have passed, the photos he took still lives.

According to the date indicated in the album I picked, those photos were taken in the ‘80s. To be honest, everything looks beautiful and real. I’m glad my abuelita was very keen on keeping and arranging the photos.

You see, my grandfather loves taking photos. Whenever he travels, he always brings a camera with him. It’s very important for him to capture the moments. Now I’m not entirely sure what camera he used on certain occasions but I did find some of them at home.

Would you like to see them? I made a video about it. I hope you can subscribe to my channel. Make sure to also click the bell icon for notifications.

So the first one is called the Canon Demi EE17, Canon’s half-frame camera released in the 1960s. This camera isn’t that heavy but it’s definitely not light. Since I’m used to DSLRs, holding it gives me a weird feeling like I might drop it if I’m not careful.

Good thing, there’s already a strap attached to it. I know it’s a weird place but it’s very effective as it won’t get in the way. And I must say, the Canon Demi EE17 is very beautiful. I hope I can still use this one. 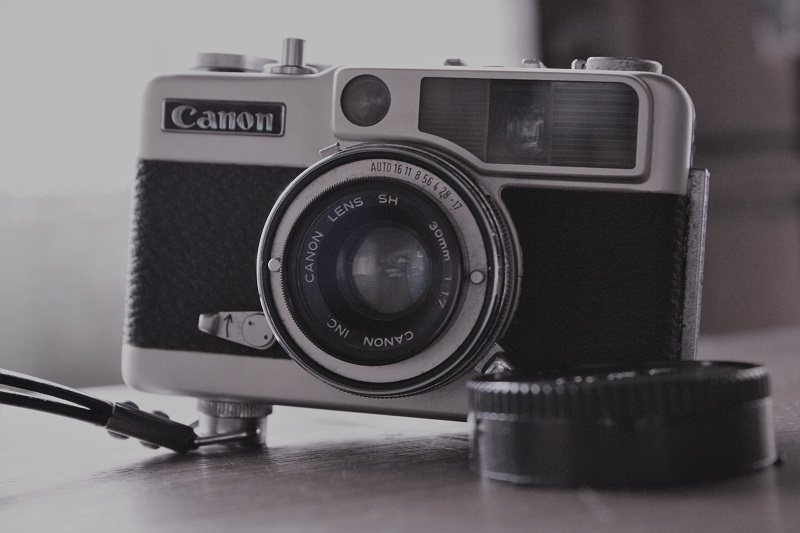 Next is the Olympus OM-10, a 35mm single-lens reflex camera launched by Olympus Corporation in June 1979.

This is actually very heavy. Though it’s heavier than my beginner Canon DSLR, I kinda like the grip. But it might be difficult for me to shoot because of the weight.

Now this one is quite fun! Pretty sure you know this camera. It’s the Polaroid Land Camera OneStep SX-70 with a rainbow stripe down the front. The SX-70 is a folding single lens reflex Land camera produced by the Polaroid Corporation from 1972 to 1981. There were actually a variety of models throughout those years and all shared the same basic design. This camera is very light and very retro. It’s so old school which reminds me of Stranger Things!

Oh btw, did you know that Polaroid just introduced the OneStep 2: Stranger Things Edition? Featuring a truly innovative flash developed by Hawkins National Laboratory, you can now turn any light into great photos every single time. Make it a summer to remember, wherever your adventures may take you!

Marketed on March 1994, the Canon Sure Shot Owl is based on the single-focal-length BF 35 camera which is an advanced model with 3-step autofocusing with one central point and a near-infrared beam. In the UK, the camera was called the Prima AF-7.

This camera is nice but I prefer the next one.

The Prima Junior S Macro (or Snappy EL Macro or CB35M in various countries) is a compact plastic point-and-shoot camera made by Canon.

This is the only camera my abuelito and my abuelita lent me. I first used this on Science projects for documentation purposes and eventually used it to capture moments with my friends. I remember passing by Kodak to purchase films and develop. It was very expensive that’s why I limit my shots. But that’s alright because I captured the perfect moments with my friends.

For this one, the Kodapak Capture I couldn’t any info. I did; however, stumbled on the Halina Simplette, a range of 126 cartridge cameras made by Haking in Hong Kong. They look really similar. But that’s not it.

Now out of all these, I really want to use the Canon Demi EE17 and Polaroid Land Camera OneStep. Yes, it might be expensive but I don’t see anything wrong with choosing film over digital.

Film photography is already perfect. It captures the real moments which are not staged and definitely not edited. Just because we can retake or edit doesn’t mean we should keep taking photos instead of treasuring moments.

Do you have a photo album at home? Do you have an actual copy of your photo – solo, with family or with friends? If it’s on social media or on your smartphone, that is alright. Just make sure that when you look back, there’s actually something to look back. 🙂